The following posts are going to be different to my last ones. I had to make some miles to get back to my schedule and also to meet up friends I know from Munich who are meeting me at South Lake Tahoe. That means, 150 miles, from Monday till Saturday morning with rough terrain and still lots of elevation.

I left Tuolumne Meadows not super early as usual because I have not slept a lot the night before because of Agnes (the bear who walked 3 times through our campsite).
I slept in, waited till the restaurant opens to have a food breakfast an had out by myself. Some hikers I knew left the day before, some were leaving later but nobody wanted to hike about 30miles/day.

The first miles were still going through big meadows and soon I caught up to a hiker named Obi-Van. He kept up with my speed and decided to join me for the day. It was nice to have some company and he is a fun guy. It was already getting late and we still had a pass ahead of us. I was getting already kinda tired but I knew I have to make it to the top and as we reached it we decided to camp up here.

The next day we started quite early and he was usually a late starter. It was still going up the first half of the day and the trail was really rough, what made it harder to keep up a fast hiking speed. Around mid-day I saw some hikers ahead I recognised and it was a group I knew already really well (Morning Glory, Pizza Taxi, Pinky, Partylog, Garfield, Jellybean, Corndoggie and …. damned can’t remember her name :D)

We had a couple river crossing and Obi Van and I kept on hiking without taking long breaks. After 25 miles around 5pm we got to a nice spot and had dinner. He told me he is going to camp here and stay with the group but I knew I had to make some more miles today. I was feeling so well because I ate a filing dinner and the mosquitos around me were also getting more annoying. It was the first long section with almost constantly having them around and as I slipped with on leg into the river and getting attacked by them I had to swear the first time in german… I realised I am not really enjoying it at the moment but I had my goal.

The third day I planned to make it to Sonora Pass (75miles after Tuolumne) and hoped to get some trail magic to make me feel better. But the trail helped me on the way there since it goes over a mountain, along a ridge and back down were there was the longest slide. As i got down I was more then happy what I found. Two gentleman, iPod and Owl, prepared a nice table with cake, coffee, cookies, soda, hotdogs etc for hikes passing by. The first trail magic for a long time and it was also really interesting talking to them since iPod has been a trail angel for many years.

I wasn’t really tired so I some time to think. Think about the trail, how I am experiencing it, how it does make me feel. I love the challenge my body and walk many miles and go fast up the hill but I can’t be in this kind of state until the end (Its half of the time I want to do the trail but I still have 200miles till the halfway point).

I was really happy as I got to Highway 50 where an hour later my friends arrived. It was so nice seeing them and we spent the whole day in South Lake Tahoe. It was really full because its 2 days before 4th of July and SLT is one of the most favourite destinations for people in this area. For me, it was way to crowded and just a whole party every day so I asked my friends to drop at the trailhead to go back on the Pacific Crest Trail. The day also helped me to realise that I want/need some friends around me but I was ahead most of them.

Back on the trail I talked to a lot of day hikers and people who do the Tahoe Rim Trails, which shares the same path as the PCT for a while. It felt really good again and the day after I found a friend who was ahead laying in the gras. We hiked together for a while but split again as I camped just after 18miles. I found a nice lake to camp next to and there were some other friendly hiker (a couple from Germany) and a men from New York. He told me that if I want to see a firework I have a good chance at Donner Pass (34 miles ahead). 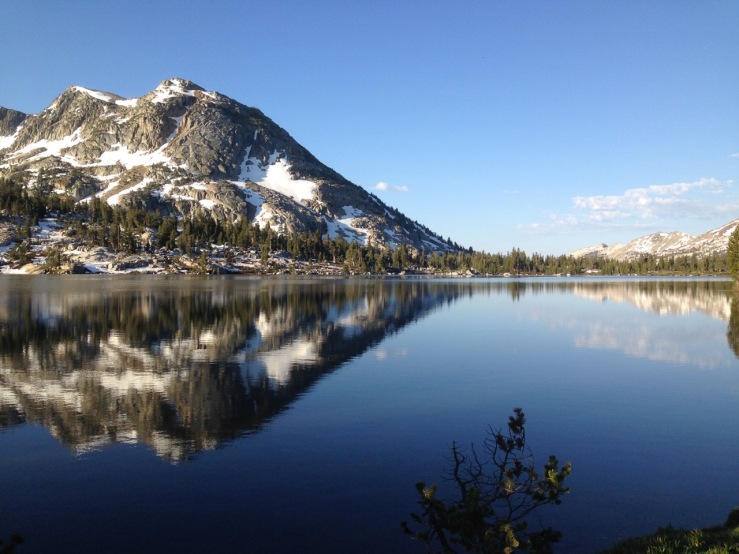 I decided to go for it and had another long day by myself and my thoughts and as I reached Donner pass I climbed up the boulders to have a view to Donner Lake where the firework was. Exactly a year ago, my brother and I watched the firework in Las Vegas and it made me really miss him and my family again.

I had 40 more miles to hike until Sierra City where I also sent my bounce box with my laptop and hard drive. I needed to get all the content of my go pro on it and its also more convenient to write those posts. The landscape was getting more greener and reminded me more and more of the scenery I am used at home. I also realised it was Day 75 on the trail and my plan is to finish it in 150 days. 75 more days, 45% of the trail done, my legs are stronger, I don’t have any issues but its a mental challenge now. 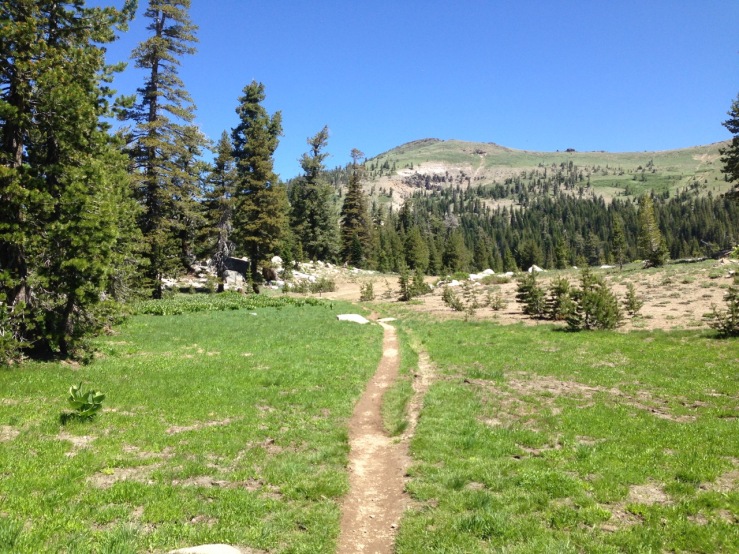 I arrived in Sierra City around noon and realised its way smaller then I expected. I really prefer the smaller towns on the trail but if its get to small, like Sierra City, you always surrounded by hikers and its hard to get a quiet moment. The Country Store was the only place with Wifi and you can imagine how it looked like in front (almost like in the underground in the morning on the way to work).

As i checked the packages, I couldn’t find my bounce box and with the tracking number I found out that its still on its way. I had to wait for it and maybe it was a good thing. I hiked every day since VVR which was 3 weeks ago and its good to take a break, especially to have time to think.

I finally got my package 2 days later and I decided to hitch all the way back to South Lake Tahoe. Why??? I met a really awesome guy in New Zealand who offered me to stay with him and the group I was hiking with the first weeks was going to arrive there as well. Also, I can take my time to relax, spent time either on the beach or hours in a cozy coffee shop. I Skyped with my parents and my sister and I also rented a car for a couple days to give hikers rides and bring some food up to the trail.

Now its my 4th zero day and I gonna have 2-3 more but I also get the feeling back that I want to get back on the trail. You always realise what you had when you lost it. Lucky me, I can have it back just going back on the trail 🙂